Included below are homes for sale in Noe Valley/Haight Ashbury. If you would like more information on any of these Noe Valley/Haight Ashbury real estate listings, just click the "Request More Information" button when viewing the details of that property. We can provide you with disclosures, past sales history, dates and prices of homes recently sold nearby, and more.

And, if you haven't already, be sure to register for a free account so that you can receive email alerts whenever new Noe Valley/Haight Ashbury listings come on the market. 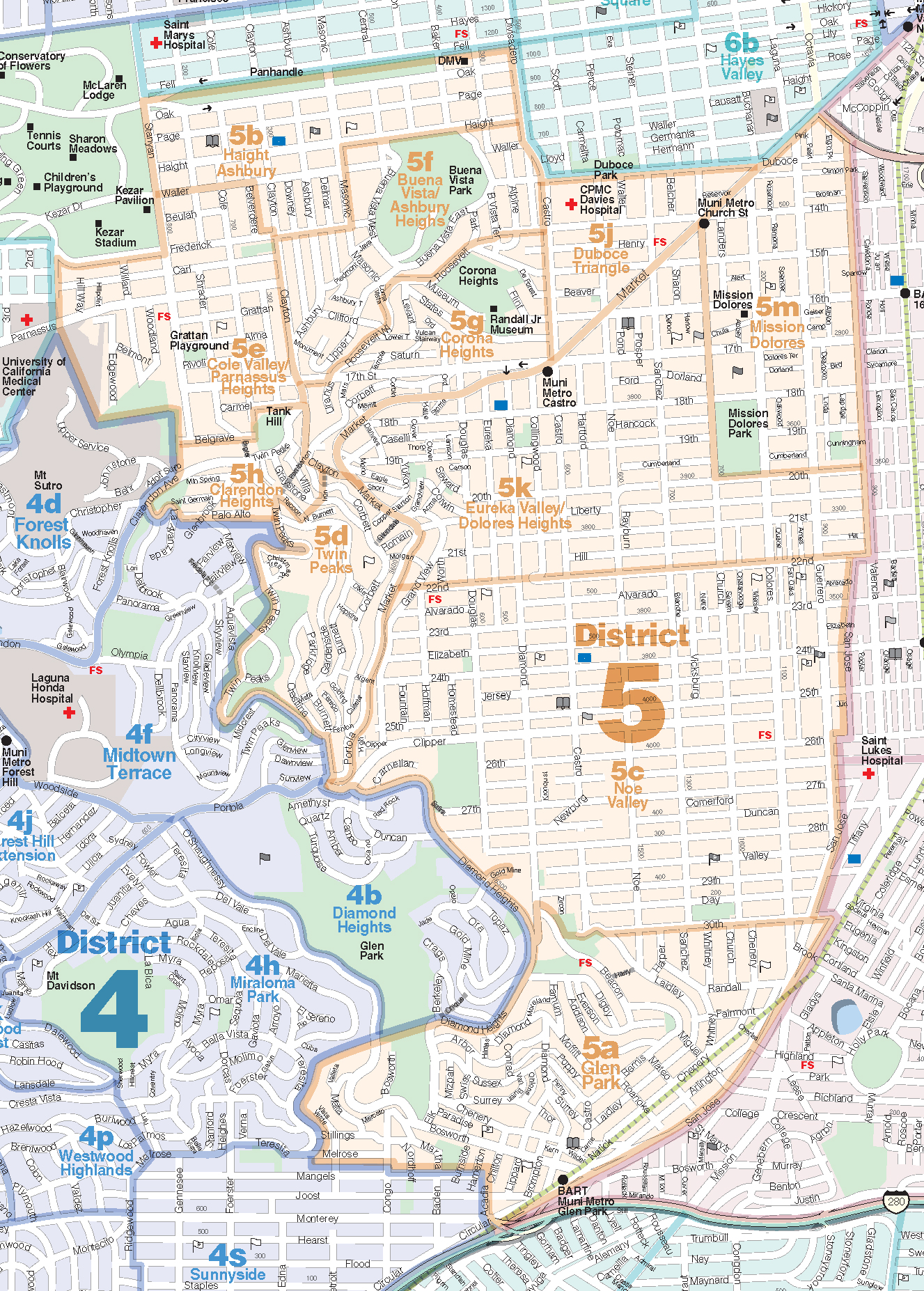 Haight Ashbury (also called the Haight or the Upper Haight) located between downtown San Francisco and Golden Gate Park is a vibrant neighborhood and well known for being the birthplace of the hippie counterculture in the 1960’s. Today Haight Ashbury is popular with young professionals and families with children. Free-thinkers still enjoy the area, with its thriving mix of culture, arts, yoga studios and music venues. This neighborhood also draws a number of tourists through its many galleries, vintage shops and galleries. Typical homes here are in multi-story period style with stair-step entrances as well as a range of remodeled and modern homes, brick-style lofts, condos as well as houses with small yards.

Cole Valley is one of the smallest and most sort after neighborhoods in San Francisco, burrowed into the hillside beneath Mount Sutro. Populating this idyllic neighborhood of iconic Victorian houses and duplexes are some of San Francisco’s most famous tech entrepreneurs, including Craig Newmark, founder of Craigslist who still visits the local cafes from time to time. The neighborhood is popular with young professionals, families and both students and staff of the University of California at San Francisco with the Parnassus campus just nearby. The intersection of Carl and Cole Streets is the area’s commercial strip. There are restaurants and cafés and historical landmark businesses such as Cole Hardware established in 1920 selling housewares, hardware supplies and plants. Although the smallest neighborhood Cole Valley has its own elementary School – Grattan a small vibrant PreK-5 public school popular with the local families.

Sometimes referred to as the Rocky Hill, this neighborhood’s history dates back to the late 19th century when George and Harry Gray began a quarry and brick-works kiln in the area. After the closing of the business, Buena Vista was built directly into these slopes, developing the area into a peaceful neighborhood with beautiful historic homes, leafy parks and beautiful views. The very best homes in the area are generally found up on Roosevelt Way and Lower Terrace, though there are some lovely Victorian cottages on Corbett Avenue, Ord and Douglas Streets. In other areas, family units and apartment buildings have unadorned fronts and flat facades built right up against the sidewalk, with a garden space behind.

Corona Heights has been cut into the large hillside and sits between Buena Vista Park and Eureka Valley. Created in the late 19th century as the Gray Brothers needed a road to transport the rock from quarrying the hillside. Corona Heights Park is now where the quarry used to stand with beautiful mature trees and lovely panoramic views of the bay and the city. There are a wide range of time period and styles of houses here, averaging two bedrooms and two bathrooms with a garage including interior access. Plan a picnic or the take dog for a walk to Mt Olympus, a mini-park is on the top of the summit and enjoy the views.

The Duboce Triangle with its lushly landscaped sidewalks and beautiful art deco and Victorian homes are located close to the center of San Francisco. Streets like Belcher, Henry and 15th are lined with beautiful trees which perfectly compliment the well-kept Victorian single-family homes and flats. Duboce also boasts its own medical center and supermarket, cafes and a small romantic local French restaurant named L’ardoise. A well-known local bike route named the “wiggle” runs straight through Duboce, alongside beautiful Duboce Park or “Dog Park”. The park is great for both dogs and owners. The upper section of the park features a playground and the Harvey Milk Community Center, while the lower half park is developed just for dogs- including their very own dog drinking fountain!

Eureka Valley (also called the Castro) is a quiet mainly residential neighborhood with both flat land and hills favored both by families and the LGBTI community. The area dates back to 1886 when the Market & Castro Street Cable Car line opened the area to development — mainly building small wood-frame cottages and two-story flats settled by European migrants. Eureka Valley was one of the few areas which escaped the fire caused by the 1906 earthquake which stopped at Dolores Street and later became a haven for those displaced by the disaster. Amongst the hills today are a wide variety of condominiums and single family houses including many stunning Victorian homes. Centered on the intersection of 18th Street and Castro lays the commercial area of Eureka Valley. This neighborhood also holds several popular annual events.

The oldest surviving structure in all of San Francisco is the Mission Dolores (or the Mission San Francisco de Asís), the sixth religious settlement established October 9, 1776 as part of the California chain of missions. Homes here are of an eclectic mix, from; Victorian, Stick-style, Italianate and Queen Anne houses with some newer developments offering a more modern touch such as the live/work lofts from the early 1990’s. The quietest streets in this neighborhood are Cumberland, Linda and Albion. Today this area is for those who love diversity and music. Anything from indie to traditional jazz can be found close to Guerrero Street’s entertainments venues. More easygoing and classy lounges are located on the 16th Street coupled with art galleries as well as the famous Roxie Theatre. You will find delicious food along 18th Street, like the independent grocer Bi-Rite, Delfina and delicious chocolate croissants from the Tartine bakery. The popular Dolores Park spans two blocks and has a soccer field, a basketball court and several tennis courts. Locals bring family and friends for a barbeque, walking the dog or to just enjoy the sun.

Noe Valley is set in a geographic basin, surrounded by steep peaks and hills on three sides. Named after the final Mexican mayor José de Jesús Noé. It was first developed in the late 19th / early 20th century and is characterized by its many late Victorian/Edwardian gewgaw-tortured style houses typical for San Francisco, built in a typical row-house fashion. Locals describe this neighborhood as its own world being separated by the hills to the north from the Castro, yet with so much to see and do which attracts both young families as well as a diverse mix of couples and singles. For local schools, the Immaculate Conception School serves this neighborhood and is one of several well regarded religious schools in the area. Noe Valley is blessed with regular sunny skies which makes a leisurely walk along the local florist, art and jewelry shops or the local grocery stores very enjoyable. The famous St Paul’s Catholic Church is also worth a visit, where Whoopi Goldberg played the singing nun in ‘Sister Act’. The local Billy Goat Hill Park is also just next door and popular with families due to its breathtaking views and the great outdoors. Living in Noe Valley, you will have plenty to choose from when it comes to eating. Just head to the main thoroughfare on 24th Street for a selection of American and Italian eateries or Indian curries. Each Saturday, Noe Valley’s Farmers Market also serves up its special delicious smorgasbord of fresh organic produce, bread, street foods and live music.

Glen Park has a village feel with an inner-city location, home to many well-kept houses along narrow streets, half of them dating back to the 1920’s or earlier. Many houses here are walk-up bungalows with a first floor garage. Newer homes are farther up on the hills, built from the 1950’s, 60’s and 70’s with street level parking space and southern views towards the Crocker-Amazon neighborhood. The main commercial streets of Chenery and Diamond host the famous bookstore, The Bird and Beckett in addition to many intimate cafes and great restaurants including Italian, Chinese and Japanese. Glen Park also has local private schools and two public schools; Glen Park Elementary and James Middle School. There is plenty of access to parks, green spaces and playgrounds in Glen Park. Billy Goat Hill Park has fantastic scenic views of the entire neighborhood and includes a popular playground for children. Joggers and dog owners also enjoy the outdoors here. For many residents in Glen Park, the area offers a natural environment close to the heart of the city. 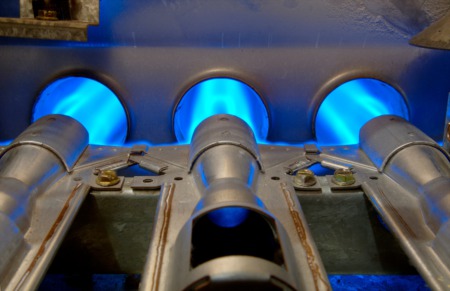 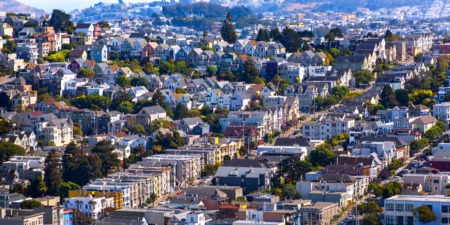 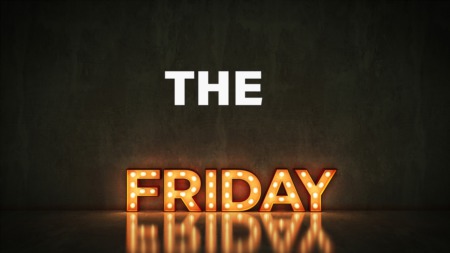